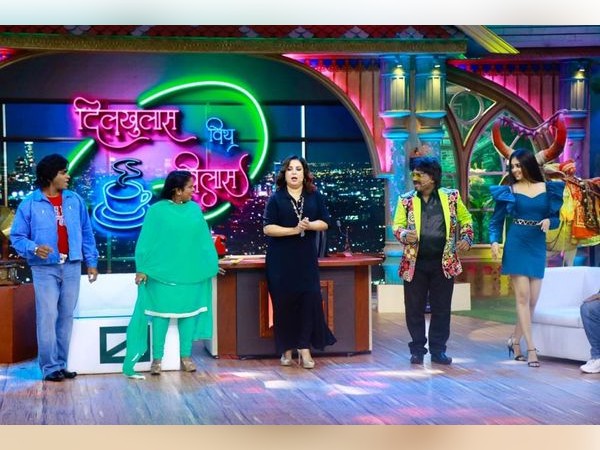 Zee Comedy Factory will start from July 31, the entire platoon including Farah Khan reached the show

On one hand, while India is still under the threat of pandemic, Zee TV is trying to lift the mood of its viewers and keep them away from stress through its upcoming reality show, Zee Comedy Factory. Ali Asgar, Sugandha Mishra, Sanket Bhosle, Puneet J. Pathak, Aditya Narayan, Tejashwi Prakash, Gaurav Dubey, Balraj, Siddharth Sagar, Chitranshi Rawat and Divyansh Dwivedi along with the country’s top comedians and artists, the witty and witty choreographer and filmmaker Farah Khan as ‘Laughing Buddha’ Due to which the show will become a rage of laughter.

While the show is going to premiere on Zee TV on 31st July, the team of Zee Comedy Factory reached the sets of Zee Marathi’s popular Marathi comedy show ‘Chala Hawa Yeu Dya’ and we must say they made everyone laugh and laugh. Gave.

Such was the chemistry between Farah Khan as well as the cast of both the shows that they shot the entire three episodes together, which will be a really enjoyable comedy experience for the viewers. Apart from performing some fun acts, Zee Comedy Factory’s beloved comic couple Sugandha Mishra and Sanket Bhosle also took on a funny challenge from the popular Swapnil Joshi of ‘Chala Hawa Yeu Dya’.

Both were asked to mimic some singers of the industry and Sugandha and Sanket made everyone tickle by mimicking Daler Mehndi and Sayaji Shinde respectively. Laughing Buddha Farah Khan was also seen teaching some dance steps to the cast of ‘Chala Hawa Yeu Dya’ on the song ‘Munni Badnaam Hui’.

Expressing her happiness on the sets of ‘Chala Hawa Yeu Dya’, Farah Khan said, “I had planned to spend only an hour on the sets, but I spent almost 4 hours here. I didn’t realize how fast the time passed as I was busy gushing over all the acts of the teams of Zee Comedy Factory and Chala Hawa Yeu Dya. It was wonderful to see that the comic timing of everyone here was very strong and they instantly brought a smile on everyone’s faces.

We are trying to make people laugh in this very challenging time with our upcoming show and I would request everyone to must watch Zee Comedy Factory every Saturday and Sunday at 10 PM from 31st July and give us a night from 26th to 28th July. Don’t forget to watch ‘Chala Hawa Yeu Dya’ at 9.30 pm too.