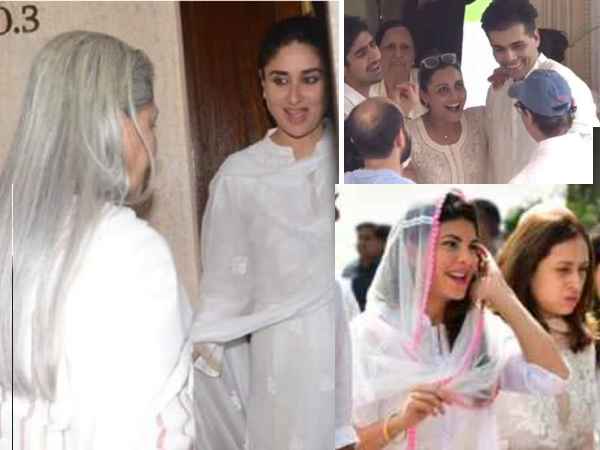 These stars including Aamir, Shah Rukh and Rani – Kareena have been trolled for not being sad at funerals

After the death of Shweta Bachchan’s father-in-law Rajan Nanda, Abhishek Bachchan had reached Delhi to pay tribute to him, from where this picture of him went viral and people criticized Abhishek fiercely. People had even asked him whether he had come to pay tribute to the condolence meeting or whether he felt that it was a reunion party.

Ranbir Kapoor, Kareena Kapoor Khan, Karisma Kapoor, Riddhima Kapoor Sahni’s grandmother, Rani Mukerji, Aamir Khan, Karan Johar and Ayan Mukerji were seen busy in talks on the death of Krishna Raj Kapoor. This picture became a topic of discussion and these stars were fiercely criticized on social media that the place, time and atmosphere are seen!

After the death of Rishi Kapoor, this picture of Alia Bhatt went viral where she had a mobile in her hand and it seemed that she was taking pictures. Fans without knowing, broke down on Alia when the truth was that she was on a video call with a family member who could not attend Rishi Kapoor’s last farewell due to Corona. Significantly, due to Corona, Rishi Kapoor’s daughter Riddhima Kapoor Sahni was also deprived of his last glimpse.

Karan Johar had posted on social media after the death of Sushant Singh Rajput that he was broken because he knew that Sushant needed help but he could not help him. Shortly after that, he appeared at Neetu Kapoor’s birthday party, after which people criticized him for calling him fake. People have even said that perhaps Karan Johar is forgetting the sorrow of Sushant’s departure by doing parties. However, Sushant passed away on June 14 and Neetu Kapoor’s birthday was on July 9.

Neetu Kapoor and the Kapoor Family

On the other hand, Neetu Kapoor’s birthday was once again a victim of criticism when the entire Kapoor family gathered together on the day of Dilip Kumar’s death and was seen celebrating Neetu Kapoor’s birthday party. The pictures of this party became quite viral. Dilip Kumar and Raj Kapoor were childhood friends and both the families are very close to each other. That’s why people questioned the Kapoor family and asked if they didn’t mind the loss of such a close friend.

Talking about his show The Fabulous Lives Of Bollywood Wives in an interview, Karan Johar said that the idea of ​​this show came to him while going to a condolence meeting. Karan told that he was going to a friend’s father’s condolence meeting with Neelam, Seema, Maheep and Bhavna, but on the flight they were talking about everything from their clothes to their looks, which made Karan Johar laugh. came and she thought of making this reality series on these four.

The internet broke on Ajay Devgan’s daughter Nysa Devgan after seeing her outside the salon a day after her grandfather’s death. People trolled Nysa fiercely and wrote that today’s children neither respect their elders nor have feelings in them. Some even called a picture of Nysa sad at Veeru Devgan’s funeral as fake. Later commenting on the matter, Ajay Devgn described such things as extremely insensitive and said that she is a child and was sent there to change her mind.

Mandira Bedi lost her husband Raj Kaushal at a very young age. But Mandra tried to control herself at Raj’s funeral and she herself was seen performing the necessary rituals of the funeral, after which Mandira was slandered on social media in the name of culture and religion. Some commented on her dress, while some criticized her strongly, blaming her for breaking traditions.

Mahima Chaudhary was clicked with her daughter on the same day after Raj Kaushal’s demise. Mahima also posed a lot in front of the camera. After this she was asked about Raj Kaushal, Mahima told how special Raj was her friend and she would soon go to Mandira’s house. Mahima also showed Raj and her old picture to the cameras and said that I will change my DP and apply it. After these statements, Mahima Chaudhary was criticized as insensitive.

Bigg Boss star Nikki Tamboli faced a lot of criticism for her decision to go abroad to shoot for Khatron Ke Khiladi after her brother’s death. Nikki had to clarify by posting a post that behind her decision is her brother’s happiness and his professional reason. Nikki was committed to a deal she didn’t want to break.