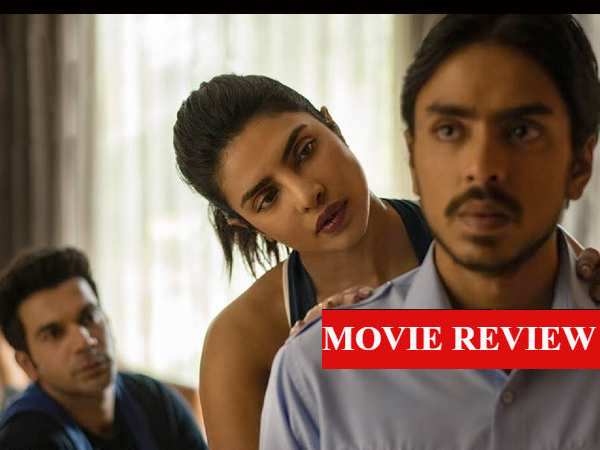 The White Tiger Review – The film is a deep satire on modern India, Adarsh ​​Gaurav and Rajkummar Rao are strong

The story of the film is of Balram Halwai (Adarsh ​​Gaurav), who is born in a house in the village of Laxmangarh, which is somehow passing through. One has to travel to other villages to show the sick father, which leads to his death. He has to leave his studies midway because of his family crippled by hunger. But the desire to get out of that dark well keeps stirring in his mind. He wants to get out of the prison of feudalism. In such a situation, Ashok (Rajkumar Rao), the younger son of America’s returnee of the cruel landlord (Mahesh Manjrekar) comes in front of him.

At first sight, Balram gets an idea that Ashok is the only person with the help of whom he can get out of this ‘hut’. He comes to the city and takes up the job of Ashok’s driver. Now Balram’s world revolves around Ashok Sir and his free minded wife Pinky Madam (Priyanka Chopra). The distance between the world of rich and poor seems to be decreasing here.. that an accident happens. With this accident, there is a fierce clash between the two worlds and ‘White Tiger’ is born. ‘White Tiger’ – a rare breed found only in a generation.

Rajkummar Rao and Priyanka Chopra are splendid in their characters but Adarsh ​​Gaurav has given a new height to the film with his stellar performances. His expressions were perfect in every frame. Adarsh ​​has done justice to the dilemma, deceit, pride, love, hatred going on in Balram’s mind. It would not be an exaggeration to say that ‘The White Tiger’ was completely Adarsh’s film. The starcast of the film has been its strong side. Where Rajkummar Rao is a rich powerful man, who is trapped in the quagmire due to political gimmicks and bribery. Priyanka Chopra is idealistic in the character of his wife. She fights conservative ideologies. Both the actors are accurate in their characters.

The film is based on Aravind Adiga’s novel The White Tiger, for which he was awarded the Booker Prize. Bringing books to the big screen is not easy, but director Ramin Bahrani has done well. However, many passages have been cut from the book, which could have added more to the audience to the story.

Despite being an American, Ramin has shown the social fabric of India very well. The good thing is that the film does not deviate from its path even for a minute. In the film, from casteism to rich-poverty, religion, politics, exploitation, patriarchy… all kinds of social axis have been satirized.

The tight script of the film makes it strong. Especially the dialogues of Balram and Ashok are very interesting. Tim Streeto should be commended for the excellent editing. However, in some places, the voice of Balaram playing in the background bothers. In some places the silence could make a scene more impressive. Nonetheless, Paulo Carnera’s cinematography gives a different color to the story. Be it Laxmangarh or Delhi.. be it the richness of the owners or the poverty of the servants.. He has spoken every scene with his camera.

The film’s starcast, dialogues and direction are its strong points. In many scenes, the difference between rich and poor has been shown very well. In one of the scenes, Balram is playing a game on TV with his boss Ashok. Excited while playing, Ashok makes her sit next to him on the sofa.. But Balaram immediately jumps up and sits down on the ground.

In another scene, Balarama and Ashok are shown putting money in the donation box of the temple. While Balarama puts the coin, Ashok is seen putting a 100 rupee note.

If you’ve read the book, the only thing that might bother you is that many parts have been cut out of the original story.

The journey from poverty to riches has been shown in many films. But ‘The White Tiger’ doesn’t evoke pity, compassion or conceit in you. It looks like a mirror. Adarsh ​​Gaurav and Rajkummar Rao’s tremendous performances can also be seen once in this film. 3.5 stars to ‘The White Tiger’ from Filmbeat.