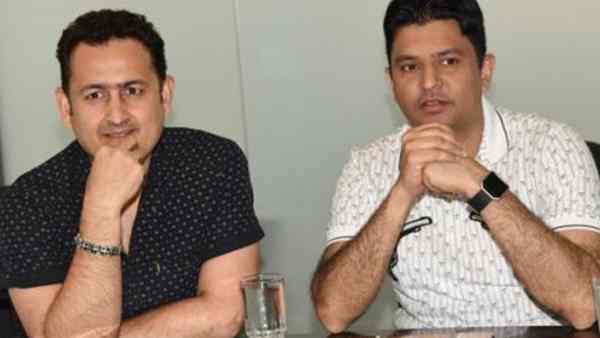 Shock to T-Series and Bhushan Kumar, Vinod Bhanushali left the company after 27 years, will open his own music label

He has led marketing for over 1000 films and has grown the company from being one of the top 3 music labels in 1997 to the largest music company in India, the largest integrated motion picture studio in the world today and 19th in the world. Biggest YouTube channel with crores of subscribers.

He has decided to pursue his entrepreneurial dreams, and is setting up a boutique content company that will create new age content. Vinod Bhanushali says, “After literally starting my career at T-Series, it is an emotional moment for me as I am leaving the company. Whatever I know about music and movies, I learned it all during my only long innings at this company. I will always be indebted to my Guru Shri Gulshan Kumar Ji (my sir) and Bhushan Kumar. Saab, for giving me a platform at T-Series and guiding me to perform and grow strongly alongside the company, and Bhushan Kumar for leading the company and supporting me after Saab’s untimely departure. for. But, with every goodbye there is a new beginning.

I have always acted like an entrepreneur, taking all such decisions which were good for the business, for the growth of the company and also for the people working there. And BK (Bhushan Kumar) supported all my decisions. I am excited to start something of my own, which I will announce soon.”

Starting his journey with humble beginnings as a Clearing and Forwarding Agent at Mumbai Customs Docs, Vinod transitioned into the entertainment business by joining Sahara Studios as an Associate Junior Worker. A chance meeting with Late Shri Gulshan Kumar ji in November 1997 became a turning point in his life. Gulshanji saw the potential in the young man and asked Vinod to join the T-series. The rest, as they say, is history.

Step into the world of marketing

Vinod learned everything on the job under the guidance of Mr. Gulshan Kumar and ventured into marketing in 1996. His big break was Salman Khan’s Oo Jaane Jaana, the first film song to air on Channel V, which diversified T-Series’ portfolio from folk, devotional and regional music. A year later, when the company’s marketing head stepped down, Mr. Gulshan Kumar handed over the responsibility to Vinod, even though he (Vinod) expressed his apprehension that he was handling production and did not have extensive marketing experience by then. Was.

Thanks to Gulshan Kumar

Mr. Gulshan Kumar said to Vinod, “He who makes, must also know how to sell.” He said, “I take the responsibility of grooming you. Now, we will not hire anyone from outside, you are the boys of our house and you have the ability and passion to do that.”
He started expanding his Hindi music catalog and identified and acquired the music of some of the historical films of Hindi cinema. Fate dealt a brutal blow to Vinod and T-Series in the form of the untimely death of Mr. Gulshan Kumar on 12 August 1997. However Bhushan Kumar, who was only 19 then, took over the company. Under his leadership and Vinod’s lessons and years of execution, he began to rebuild the company to realize Mr. Gulshan Kumar’s vision.

With the digital evolution, T-Series not only started licensing music from 2006, but also ventured into publishing and strengthened its digital distribution network, under Vinod’s marketing expertise. Interestingly, Vinod has been the driving force of two cycles of music in T-Series. The first was in the cassette and CD era with Sonu Nigam’s Deewana and Adnan Sami’s Tera Chehra. And in the digital age, with singers like Guru Randhawa, Jubin Nautiyal and Dhvani Bhanushali, whose songs have garnered over 1 billion views on YouTube.

Following the words of Mr. Gulshan Kumar that ‘content is king’, he created a huge library of superhit songs. And today, T-Series’ main YouTube channel is the No. 1 YouTube channel in the world with nearly 190 million subscribers and more than 15,000 songs uploaded, which are frequently viewed by subscribers and music lovers. This achievement is the result of years of hard work creating and marketing thousands of songs to make them so memorable today. “We know that Gulshanji is proud to see T-Series as the No. 1 channel on YouTube and the premier film studio in the country today,” recalled Vinod, who has been an integral part of this journey.

Moreover, Vinod’s role in the company also grew with the changing times. Starting with audio and video cassettes, he was also actively involved in T-Series’ movie-production business, successfully entering the digital space. He was the co-producer of many important and blockbuster films like Kabir Singh, Batla House, Saaho, Thappad and Tanhaji: The Unsung Warrior. Not to be forgotten, releasing around 45 films in three years in the pre-Covid era is also a record achievement for anyone in the Hindi film industry. Apart from this, he has also led the marketing and promotion of more than 1000 films.