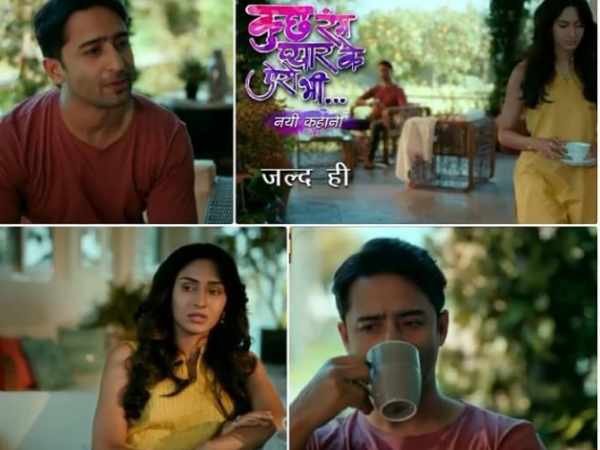 Sony Entertainment Television, as a brand, is known for offering its viewers a variety of quality and limited duration programs with unique storylines. Kuch Rang Pyar Ke Aise Bhi is one such popular franchise of the channel which has forged a strong bond with the audience through the onscreen couple – Dev and Sonakshi, fondly called by the fans as ‘Devakshi’.

Now taking the story forward, Kuch Rang Pyar Ke Aise Bhi – Nai Kahani will look into the changing relationship between Dev and Sonakshi as a married couple and parents. Produced by Beyond Dreams Entertainment Pvt Ltd, the show premieres on July 12 and will be aired every Monday to Friday at 8:30 pm only on Sony Entertainment Television.

Dev and Sonakshi have earlier introduced the audience to different emotions, which beautifully depicted aspects like each other’s companionship, mutual understanding, love, compromise, resentment, separation and upbringing. In the first season, both of them met, fell in love between them and then they fought every difficulty to be with each other.

Among them was Dev’s mother Ishwari, who expressed excessive authority. In the second season, it was shown how Dev and Sonakshi go through a whirlwind of emotions, where they face difficulties with each other, compromise and upbringing.

This is how the third season will start

In the third season, this new chapter in the lives of Dev and Sonakshi will examine what is needed to maintain the sweetness in a relationship in unknown circumstances, and will the time bring relief or create a rift in the relationship?

Sharing his opinion on the character of Dev Dixit, Shaheer Sheikh said – It is always exciting to see yourself grow with different seasons of a show, as it brings you closer to your character and the team in a very special way. Dev Dixit is one such role, which I loved playing and for this I got a lot of love from the audience as well. The buzz of the new chapter of ‘Kuch Rang Pyar Ke Aise Bhi’ happening on social media gives a lot of encouragement and I hope this season too the viewers will get a chance to know some interesting things related to relationships. It is a wonderful experience working with Erica, Supriya ji and all the rest of the cast once again.

At the same time, Erica, who plays Sonakshi, considers this story to be very special. Erica says the way every relationship and every marriage matures, similarly the writers of ‘Kuch Rang Pyar Ke Aise Bhi – Nai Kahani’ also wanted the story to mature in the upcoming season. It is very special for me to continue the journey of Sonakshi, who is currently at the crossroads of her relationship with her husband. When people message us about how much they love Dev and Sonakshi’s chemistry, my heart fills with joy. I hope the viewers will enjoy watching the new season as much as we enjoyed making it and will continue to shower their love on us like this!

Well-versed artist Supriya Pilgaonkar, who plays Shaheer Sheikh’s mother, talks about the character of Ishwari Dixit, “As an actor and a parent, I found the character of Ishwari very interesting and endearing. On one hand, she is an example of a strong mother who raised 4 children on her own strength, while on the other hand, she has a sense of insecurity as a mother and a mother-in-law. It is always exciting to play a character with different colors and I am glad to be back with this team. I am sure ‘Kuch Rang Pyar Ke Aise Bhi – Nayi Kahani’ will bring new colors to the watch-list of the viewers on television.

Producers of the show – Yash and Mamta Patnaik of Beyond Dreams Entertainment Pvt Ltd. while talking about the story of this season said – Love is a feeling that exists for every season and for every reason. There was a time when stories ended with the hope of happiness. But in its second season, Kuch Rang Pyar Ke Aise Bhi transcended this situation, showing the emotional transformation of a couple after their marriage. Our lead characters, Dev and Sonakshi, whose roles Shaheer and Erica performed beautifully, were highly appreciated for their accurate portrayal of their characters. This quality is what brings reality to this story and we have continued this in the new chapter as well.

Talking about the show, Ashish Golwalkar, Content Head, Sony Entertainment Television and Digital Business, said, ‘Kuch Rang Pyar Ke Aise Bhi’ is a highly acclaimed franchise and the way its second season started on public demand, the show It was proof of success. The audience got hooked on Dev and Sonakshi’s relationship very well, and we are sure that its Nayi Kahaani or Yeh Naya Adhyay will further strengthen its bond with the audience with its refreshing story.

The show will see Shaheer Sheikh and Erica Fernandes reprising their old roles of Dev and Sonakshi, while Supriya Pilgaonkar will be seen in the role of Dev’s mother Ishwari. Watch ‘Kuch Rang Pyar Ke Aise Bhi – Nayi Kahani’, from 12 July 2021 Every Monday to Friday at 8:30 pm only on Sony Entertainment Television

Shaheer Sheikh, Erica Fernandez and Supriya Pilgaonkar are excited for their show Kuch Rang Pyaar Ke Aise Bhi season 3 which premieres on July 12 and will telecast on Sony Entertainment.