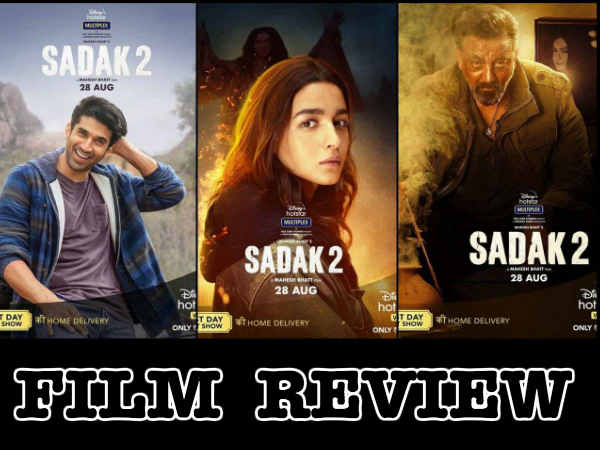 The story of the film begins with Aaliya taking revenge. Arya (Alia Bhatt) sets out to take revenge on her aunt, who is now her stepmother. Because in the greed of wealth, along with her father, she has murdered her mother. At the same time, the father has also been made a blind devotee. With this, Arya has been declared insane so that no one believes her words. But Alia prepares an army of her own on social media to fight this entire religious guru and Baba’s business. But is there really enough power in this army that Arya can take revenge from him. This is not the story of the film at all.

Because the story of the film changes after Arya meets Ravi (Sanjay Dutt). Ravi, whose late wife Pooja (Pooja Bhatt) made the last booking of his travel company in Arya’s name. Arya and Ravi embark on a journey together to expose Arya’s babas and fight superstition. But when this road ends and reaches the destination, then the film becomes the story of Ekta Kapoor serial of a family. Where there are some intrigues, some secrets and some masks.

In the film, Alia Bhatt sees a father in Sanjay Dutt who she could not find. And in Alia Bhatt, Sanjay Dutt sees the daughter whom his wife went to adopt, but could not come back alive. This father and daughter chemistry between the two has become good and both seem to be trying their best to play it. But if no one supports him, it is the screenplay of Mahesh Bhatt and Suhrita Sengupta in the film.

The main characters of the film are only two – Arya (Alia Bhatt) and Ravi (Sanjay Dutt). Interestingly, both are psychopaths. And both have tried their best to play their characters well. But in some scenes where Sanjay Dutt is seen holding the character too much, Alia is seen leaving her character.

Whatever work has come in the part of Aditya Roy Kapur, he has done it as he could. Despite being a strong character, he doesn’t seem to leave his mark anywhere in the film. The main plot of the film was Dharmaguru and Dhongi Baba in the part of Makrand Deshpande, but the graph of his character is so loose that there was no scope to make an impact in it. If there is a faint star in this weak story, it is Jisshu Sengupta who plays his character brilliantly. Priyanka Bose does not have many scenes but she also leaves her mark.

To prove the film a sequel, an attempt has been made to connect the road to the road in a random manner. For this, street flashback scenes have been used so much in the film that you will start getting bored. Pooja Bhatt is present in the film only in the scenes of her first film. The film was a story of a journey but there is nothing in this journey that can be remembered. If anyone can ever catch this loose story of Mahesh Bhatt, then it is the acting of the stars.

The film is a story of roads and roads but Jai Patel’s cinematography doesn’t force you to go along on this journey. Sandeep Kurup’s editing might have saved this film but it has not happened. There were some scenes in particular, without which the film might have been good. Not even Subrata Chakraborty and Amit Ray’s production design takes you into the world of Babas. Even in Priyanka Bhatt’s costume, Baba could not breathe life so that he could look like God. All in all, a good story is seen as a failure by a weak team.

The specialty of the films of Bhatt camp is the songs. The songs of the film may sound fine on listening to the album but these songs do not leave any impact in the film. Neither does anyone help with the script. At the same time, the background music also does not help the film. While the music team of the film includes big names like Sandeep Chowta, Jeet Ganguly, Prashant Pillai, Ankit Tiwari.

The film makes a good start and promises a good film as well. Some scenes between Sanjay Dutt and Alia Bhatt have become good. At the same time, before the interval, the film manages to keep you engrossed. All the twists of the film take you towards a good story.

where did you disappoint

Even after half the film, nothing seems to happen in the film. Just a lot of twists and turns with every twist the villain of the film changes which will bother you after some time. Upon reaching the climax, the entire film piles up like a palace of cards. And you would never have been so disappointed with any film.

This movie is high shop fade dish. You will love everything while window shopping but in the trial room you will just leave disappointed. So believe us, you can easily skip this film. Nothing will be missed like this in life. 1.5 stars to the film from us.