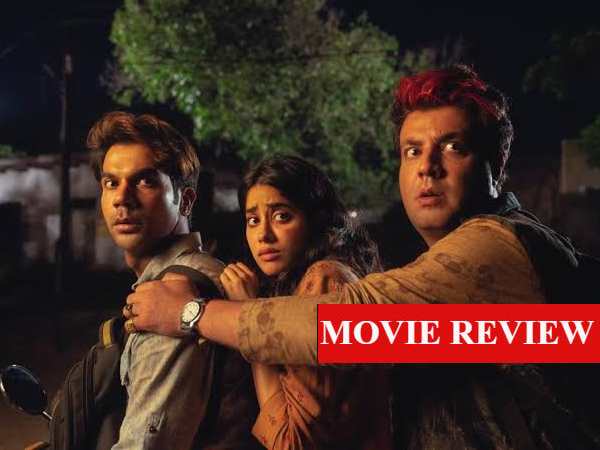 There is an old practice in a place called Bagadpur called ‘Pakad Vivah’, where the bride is kidnapped and married (and no one objected to this practice). On some occasions the girl agrees, in some not. But this is a practice that has been going on for centuries in Bagadpur.. and now also a kind of business. Bhavda Singh (Rajkumar Rao) and Kattani (Varun Sharma) are in this business. Both do the job of raising a girl. But the desire is to go to Noida and become a crime reporter.

However, in this catchphrase, one day both of them pick up a girl, whose name is Roohi (Jhanvi Kapoor). But due to some reason he is unable to reach Ruhi to the boy whom she wants to marry. On the orders of their boss, the two bring Roohi to a broken factory in a distant forest for a few days. But from here there is an entry in the story of Afza .. a ‘Mudiyapari Witch’ .. who aspires to get married. She enters the body of the unmarried girl and stays till she gets married. Here, Bhanvad has feelings for Roohi, while Kattani’s heart burns for Afza. In the midst of this love triangle, such turns come in the lives of these three, that from their friendship to their lives, their lives are at stake.

Will Bhanda and Kattani be able to save the innocent little Roohi trapped in Afza’s clutches? Or some big trouble will come on them.. The whole story of the film revolves around this.

One of the weakest aspects of the film is its direction. The story begins with a catch-up wedding, but there is no further talk in the film about that practice. It seems that the director forgets Bagadpur after a few minutes. There are many such episodes in the film, which have remained half-baked. The screenplay written by Mrighdeep Singh Lamba and Gautam Mehra is very weak. After the average first half of the film, you would expect the second half to have wrapped up the subject in some strong way. But nothing like this happened. The film gets weaker scene by scene. Janhvi fails to tie the knot despite good performances from Rajkumar and Varun. Especially the awkward climax of the film turns the mind and sour.

Janhvi Kapoor has given her best in both the characters Roohi and Afza. While Roohi looks innocent, she has been successful in intimidating as Afza. But the script of the film does not do justice to his character. There are few dialogues in Janhvi’s hands, and few gestures. You want to see more of them in the film, but the director has limited both the characters.

At the same time, Rajkumar Rao was also not seen doing anything new. Especially the language that has been tried to give them is very wasteful. Many dialogues have been spoken in such a way that it is not understood. Perhaps this is the reason why Varun Sharma looks better than Rajkummar Rao in many scenes. Varun has done justice to his character. No character leaves a mark in the co-stars.

Mrigdeep Singh Lamba and Gautam Mehra’s screenplay is very weak, leaving little room after that. The story hiccups from the beginning, and runs flat till the end. A few punches do the work of comedy. Huzefa Lokhandwala’s editing tries to tie up the broken screenplay, but succeeds only in parts. Amalendu Choudhary’s cinematography takes the film a little closer to reality, be it a small town like Bagadpur or a dense forest.

The music of the film is given by Sachin-Jigar, which impresses. The songs are written by Amitabh Bhattacharya and IP Singh and Jigar. The song ‘Kishton Mein’ picturized on Rajkumar- Janhvi brings a romantic feel to the story. The chemistry between the two is good.

The only positive side of the film is its actors. The trio has tried hard to elevate this breathless story above their acting. At the same time, what is not in its favor is this script. The success of ‘Stree’ was not because of its characters or the cast… but because of its strong script. Its script was written with a lot of depth, there was a strong message. And that depth is missing here. The quirky language of the characters, the absurd practices, the forced comedy, romance with horror… all these things make the script breathless.

Tired of being locked in the house for a year and want to enjoy going to the cinema, then Roohi can be seen. But if experiencing a good film is your priority.. then Roohi might disappoint you. 2 stars to the film from Filmybeat.