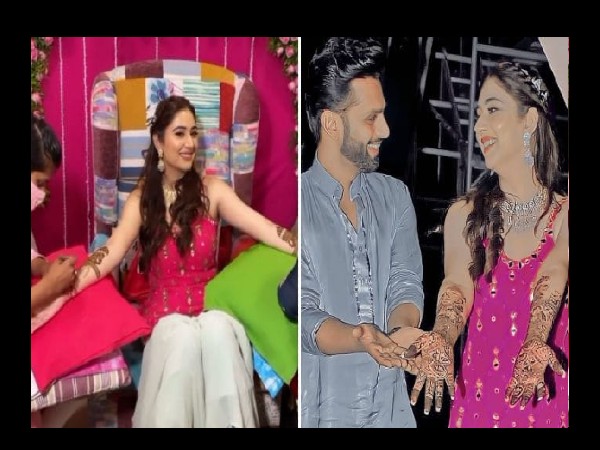 A stage was set up for Disha’s Mehndi called Dulhan. Where she was sitting in a luxurious way and getting the mehndi applied. Which looks very beautiful. Disha’s sitting area was also decorated with flowers in a very special way. Ek Dulhania Wala Ehsaas was present for Disha Parmar.

On the other hand, Rahul was also seen as a bridegroom from his look in this Mehndi ceremony. The happiness of Disha Parmar and Rahul Vaidya can be clearly gauged from these pictures of both. Disha Parmar is seen posing here with her special friends.

Rahul Vaidya is preparing for his marriage

Recently, Rahul Vaidya told that he is finding it very difficult to prepare for the wedding in Kovid. He has said in a video interview that it is not easy for him to prepare for marriage keeping in mind less people. Rahul Vaidya said that the work of sending his wedding card is still going on in many places.

Rahul Vaidya has also shared a video of Arshi Khan on his Instagram story. Which is showing that Arshi Khan has also got Mehndi done for the wedding of her special friend Rahul Vaidya and Disha Parmar. Arshi is saying in this video that she loves getting mehndi applied anyway. Arshi Khan and Rahul Vaidya’s friendship continues since Bigg Boss 14.

Rahul Vaidya will wear these clothes in marriage

Rahul Vaidya has also shared a video on his Instagram where he is telling that he has a lot of kurtas for many special days before and after marriage. In this video, Rahul Vaidya has given a glimpse of his wedding clothes which he is getting as a gift. Rahul Vaidya is very excited about his marriage.