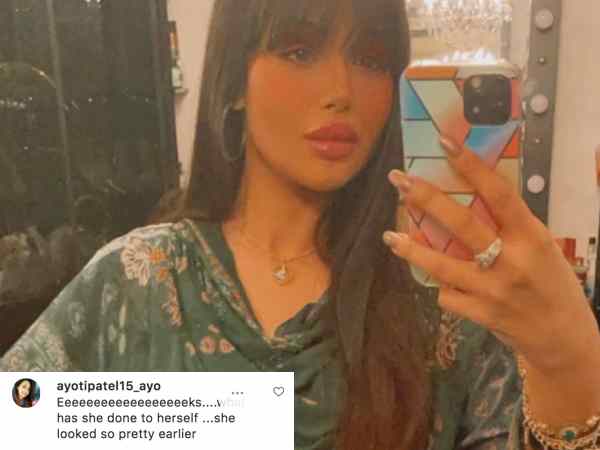 Vaani Kapoor started her career with the film Shuddh Desi Romance. Vaani Kapoor looked quite different in this film. After this, there was a lot of discussion about her lip surgery in Befikre and her pictures were compared.

After Vaani Kapoor’s lip surgery, she was trolled badly on social media. Some called him a duck and some made jokes on his pictures. However, after Befikre, Vaani Kapoor raised such flags of success with War that everyone stopped talking.

When Priyanka Chopra stepped into Bollywood with Andaz, she looked quite different. Slowly his looks started changing. Before joining Hollywood, Priyanka Chopra became a desi girl but the audience was shocked to see her lip surgery.

Mouni Roy started her career with Kyunki Saas Bhi Kabhi Bahu Thi and at that time she used to look like in this picture. After this Mouni became the hottest actress along with becoming the serpent of TV and her changed lips caught everyone’s attention.

When Anushka Sharma appeared in PK with her enlarged lips, no one could believe what she had done to herself. However, later Anushka confessed that she had tried something new for a role which is not permanent and will get better in a few days.

Preity Zinta can be considered as the cutest actress in the Hindi film industry. After Preity Zinta’s lip surgery, she changed so much that it was difficult to see her cute avatar again.

Gauahar Khan got this disease when she was doing a show called Khan Sisters and during a photoshoot she was told by a photographer that you have thin lips.

You can see the difference between then and now Katrina Kaif. However, Katrina worked so hard with changing her look that she is currently the top actress.

When people saw Sridevi like this at an event, everyone was quite shocked. Lip surgery cost Sridevi very much. However, later Sridevi got her lips changed.

Kangana looks equally beautiful even after the surgery but was she lesser than the one she was before? Kangana also enhanced her lips and appeared in front of the audience in a new look. Kangana believed that everyone in the industry does this.

Dhoom girl Esha Deol has also got her lip surgery done and was caught in the cameras. His new look was widely criticized by the audience.

If you compare Malaika Arora with the initial picture of Malaika Arora’s career, then it will not seem that both these pictures are of the same person.

Nargis Fakhri is one of the few heroines who already had the perfect pout. But despite this, Nargis got her lip surgery done and her new look was trolled a lot.

Rakhi Sawant started her career with the music video of Pardesiya Yeh Sach Hai Piya. After this Rakhi never looked back. She did what she thought was right.

READ ALSO -   20 years of Gadar: Govinda and Kajol were the starcast, this was the real climax, the film would have been a superflop