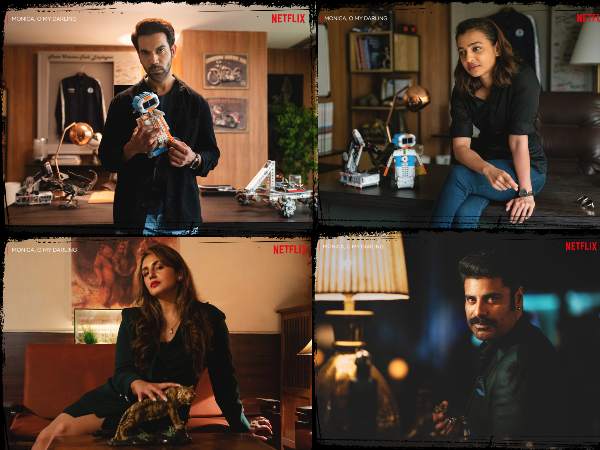 OTT platform Netflix has announced its upcoming film ‘Monica O My Darling’. On the occasion of Huma Qureshi’s birthday, the first look of all the star cast of the film has also been released. Directed by Vasan Bala, produced by Matchbox Shots, the film will feature an ensemble cast of Rajkummar Rao, Huma Qureshi, Radhika Apte, Sikander Kher, Bhagwati Perumal, Akanksha Ranjan Kapoor, Sukanta Goel and Zayn Marie Khan.

Crime, comedy and drama .. all this will be seen in the story of Netflix’s upcoming film ‘Monica O My Darling’. The film has a tinge of black comedy and white collar crime, in which a young man along with some people plan a brutal murder. The characters will be seen going to any extent for survival in this dark and terrifying crime drama.

Director Vasan Bala shared his excitement, saying, “Making a crime film was always on my list and making it with Matchbox Shots for Netflix makes it an absolutely fascinating combination. The film is full of greed, love, betrayal, There will be a glimpse of anger.”

Sarita Patil, Producer of Matchbox Shots, said, “Monica O My Darling is special to us for two reasons. We are excited about Matchbox Shots first collaboration with Netflix and second we have known Vasan Bala for many years and with him. It’s a pleasure working.”

Pratiksha Rao, Director, Netflix India, said, “An intriguing storyline, a stellar cast and a genre that can be explored. We expand our film slate by bringing in diverse stories from across the country, and we are looking forward to ‘Monica O My Darling’ ‘ For Matchbox Shots, Vasan Bala and looking forward to collaborating with a talented cast including Rajkummar Rao, Huma Qureshi, Radhika Apte.”