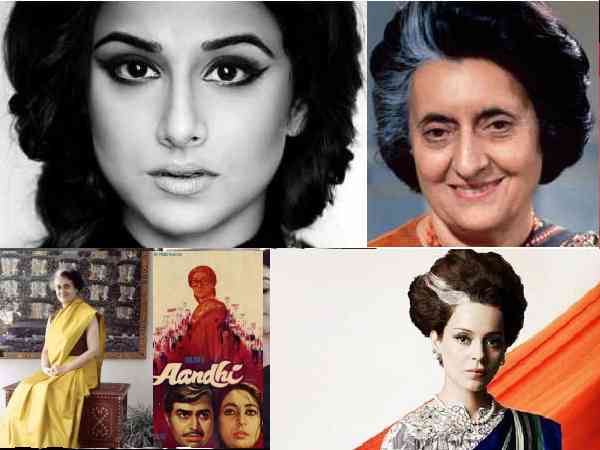 Many films have been made on Indira Gandhi before Kangana Ranaut’s Emergency, Vidya Balan will also become Indira

The controversy of Aandhi and the fear of Indira Gandhi proved that the film reminded her a lot. At the same time, during the Emergency of 1975, he completely banned the film. He feared that the film would open up a lot that would not be in his interest at all.

Ban was lifted after years

In some of the posters of Aandhi, it was even printed to see the real story of your Prime Minister on the screen. Indira even ordered her staff to decide whether the film should be released or not. Although he himself never saw this film. After this, Indira banned the film in the Emergency of 1975. Later this ban was lifted after the Janata Party government came to power.

There was a lot of controversy even before the release of this film. Sanjay Gandhi and Indira Gandhi were made fun of in the film. Not only this, the film had a lot of sarcasm on him. The film was not cleared by the censor board. The film was the first sarcastic film on the Indira Gandhi government.

The film was shelved due to the Emergency of 1975. Later the censor board handed it over to the central government. The Center had raised 51 objections to the film. Shabana Azmi, Raj Babbar, Rehana Sultan, Surekha Sikri, Manohar Singh and Utpal Dutt did excellent work in the film.

There are some incidents that happened in India, to which the sentiments of the people are attached till date. 31 October 1984 is such a day, which people cannot forget. Prime Minister Indira Gandhi was shot dead by her two Sikh bodyguards. After that, riots spread all over the country.

The story of the film was woven around a Sikh family where a husband and wife live in Delhi with their three children. Everyone lives together in the locality, but soon after the assassination of Indira Gandhi, the atmosphere completely changes. The film had tried its best to portray the dreadful scene of the Sikh riots on screen but the film could not leave a deep impact.

Madhur Bhandarkar’s film Indu Sarkar was based on the 1975 emergency. When Prime Minister Indira Gandhi declared a 21-month emergency in the country. Neil Nitin Mukesh – Sanjay Gandhi and Supriya Vinod appeared in the role of Indira Gandhi in the film.

This Punjabi film on the assassins of Indira Gandhi also created a lot of controversy. In the film, both the killers of Indira were presented very brilliantly. Congress objected to the film. Apart from this, the producer of the film paid a bribe to get the film cleared by the censor board.

Release was in big trouble

READ ALSO -   When Shilpa Shetty used to tease her own sister Shamita Shetty, "She was fair and I am black"