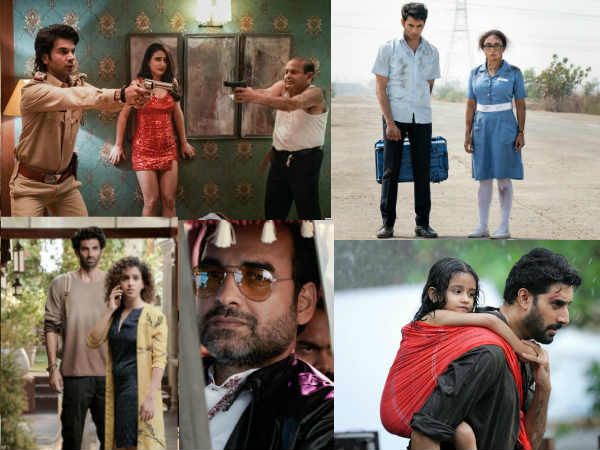 Here four stories run concurrently, which collide with each other at different points. The first is the story of Akash (Aditya Roy Kapur), whose sex tape with his girlfriend Ahana (Sanya Malhotra) has been leaked on a porn site. Ahana is married to someone else in four days. But now this tape creates a stir in the lives of both and Sattu Tripathi comes to get them out of trouble. The second story is that of Bittu Tiwari, who was once believed to be the right hand of Sattu Tiwari. But in order to settle down, he broke away from the world of crime. He has a full family now. But it is said that old karma never gives up. This is the tragedy of their life. The third story is of Alok aka Aloo (Rajkumar Rao), who is in love with Pinky (Fatima). And in the affair of that love, he goes from stealing to murder. The fourth story is of Rahul and Shreeja. Those who are troubled by their lives and jobs. But at one stroke, fate throws such a dice that the straight flat life of both becomes unpredictable every moment. And all these stories and all the characters are associated with Don Sattu Tripathi (Pankaj Tripathi). The events of Sattu’s life continue to affect all these characters or rather all the pieces are taken to their respective homes.

“What is a human? Green, blue, red, yellow pieces on the board of life.. and the dice of all these are in the hands of the one above.” With this idea, Anurag Basu has tried to show different genres simultaneously through four stories. To some extent he has also been successful. The film has comedy, emotion, suspense and plenty of volatility. You may fail to a great extent in anticipating what is going to happen the next moment. It can be called a director’s victory .. as well as the support of the best actors. But at a juncture, ‘Ludo’ reminds us of the 2019 Tamil film ‘Super Deluxe’. The blueprint of the film looks pretty much the same.

Ever since the film was announced, a lot of expectations were being raised from its starcast. It is a matter of relief that the film has come true in this regard. All the characters have looked very strong. Abhishek Bachchan in the character of Bittu Tiwari seems to be from Rach Bas Gaye. Sometimes anger, sometimes love and sometimes emotion.. comes out well on their face. At the same time, Rajkumar Rao has also shown tremendous performance by becoming Alok Kumar Gupta aka Aloo. Pankaj Tripathi, Fatima Sana Shaikh, Aditya Roy Kapur, Sanya Malhotra, Rohit Saraf, Pearl Mane, Inayat Verma all have done commendable work in their respective roles. The special thing is that despite having such a wide cast, the director has done justice to all the characters.

Not only the direction, but Anurag Basu has taken up the responsibility of story, cinematography, screenplay and production of the film. Anurag Basu has a mark of his own, which shows up on Ludo. The script of the film could have emotionally attached the audience to the characters even more. But getting closer it missed. Whereas Anurag Basu should be praised for cinematography. The different environments of the four stories and their characters are shown in a very spectacular way. A few more minutes could have been cut in editing by Ajay Sharma. This two and a half hour long Ludo game gets boring. It could have proved more effective with a tighter script. The dialogues written by Samrat Chakraborty are excellent in some scenes, while the narration and average in some scenes.

The music of the film is given by Pritam, while lyrics are penned by Saeed Qadri, Swanand Kirkire, Shlok Lal and Sandeep Srivastava. The songs of the film have become good. And the best part is that the songs take the story forward. In the voice of Arijit Singh, ‘Aabad wasted’ is melodious.

The strongest aspect of the film is its starcast. Every artist has held his character firmly from beginning to end. The four stories are quite interesting separately. But the factor that holds the film back is its length. This full two and a half hour film gets boring on many occasions.

‘Ludo’ can definitely be seen once for its tremendous starcast. Its four different stories take an interesting start, but slowly go on getting confusing. Hence, the climax of the film does not leave an impact. 3 stars from Filmbeat for ‘Ludo’.