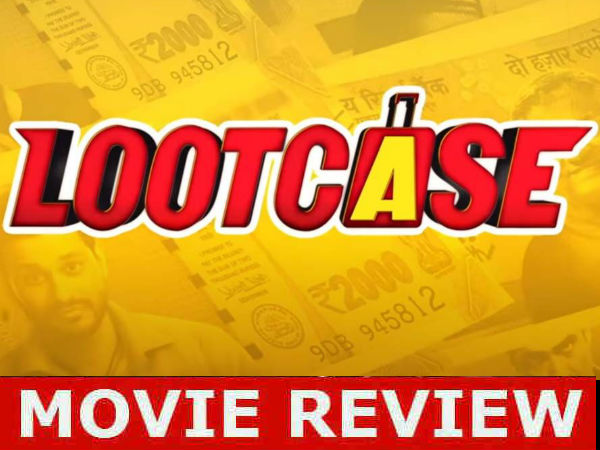 Lootcase Movie Review – Every character in this movie will win your heart, great dose of comedy

The story of the film is the same as it usually is. A common man finds a bag full of money and then the people behind that bag will slowly come to the fore and this game like mouse cat will become more and more fun. The same happens in robbery cases. As soon as Nandan gets the bag, gradually many of the deserving of that bag will go on adding to the story.

Gajraj Rao will be seen in the role of a villain this time in the film. Minister Patil, whose bag is it. Inspector Kolte works with Minister Patil in whose role Ranvir Shorey appears quite powerfully. Vijay Raaz is doing what he does best – becoming a gangster. On the other hand, Rasika Duggal has been seen doing something different this time and she gets the character of Lata, a common woman who is always furious at her husband.

The comic timing of the film is good. Especially Kunal Khemu. The dialogues and editing of the film make its comic timing more brilliant. The beginning of the film promises a good comedy when Nandan finds a suitcase full of 2000 notes in front of Sulabh Toilet. But still this comedy does not work much for the audience. It seems that jokes begin but do not end in the right place. Although Kapil Sawant’s dialogues do give you some great punchlines. And most of these come from the parts of Gajraj Rao who will garner applause from the audience.

The starcast of the film is superb and hence every character looks in his best form. Kunal Khemu has the ability to captivate and keep the audience hooked, which is clearly visible in his Nandan as well. His innocence in the character of a common man is liked and this innocence keeps you hooked despite knowing everything in the climax of the film.

Rajesh Krishnan has tried his best to keep the film hooked but his film works more because of his stellar starcast than his story. Everyone seems to be trying their best to fill the weaknesses of the film with their acting abilities. The only problem is that this effort is sometimes clearly visible and there the film seems to be missing from the audience. The film promises a great comedy with its first scene but gets buried under its own expectations.

Rajesh Krishnan’s screenplay in the film, despite good dialogues and story, fails to tie the whole film together. So the satire and dark comedy of the film makes big promises but gets tired on the go. Cinematographer Sanu John’s camera works well for the film. Anand Subaya’s editing tries to give direction to the film but looks unsuccessful.

The shortcoming of the film is not starting things and finishing them. Like Nandan’s didi is mentioned throughout the film, people wait for didi but didi doesn’t even come. That angle is just left incomplete which disappoints. Thus many things in the film which point towards a good sub plot but do not fulfill them.

Despite these shortcomings, the film wins your heart with its brilliant characters. The graph of every character is good in the film. While Kunal Khemu as Nandan does not want to be Employee of the Month, Rasika Duggal wins hearts as Lata, a woman buried under the burden of running the household and the taunts of her neighbours. Aryan Prajapati as Lata and Nandan’s youngest son also lets out a few laughs.

where did the mistake happen

The music and songs of the film break its pace, while the introduction of good jokes but their fall flat somewhere leaves the audience disappointed. That’s why the film doesn’t win your heart but its actors win your heart.

Lootcase is not a waste film, just plain khichdi with no papads and pickles. Therefore, if you are hungry, you can also eat plain khichdi. And sometimes hot khichdi also tastes delicious. So just understand that the loot case is the same khichdi. Your time will not be wasted in the film provided you are in the mood.