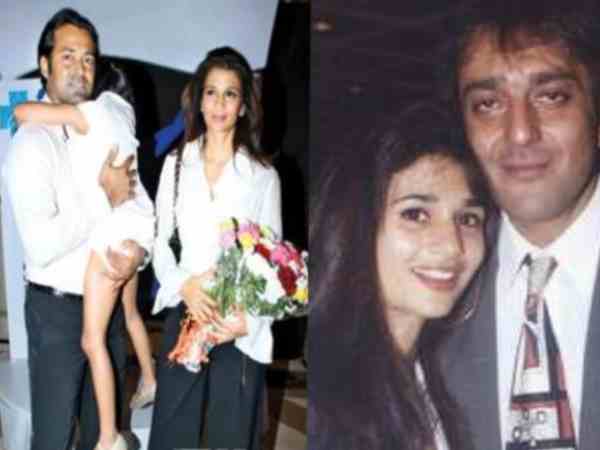 After the departure of Mahima Chowdhary, Leander Paes went all out to please model Rhea Pillai. Riya was then the wife of Bollywood star Sanjay Dutt and was also an Art of Living coach. Riya may have been tied in marriage to Sanjay, but there had been a lot of distance in their relationship.

Sanjay had admitted himself guilty

Sanjay Dutt himself admitted that the reason for breaking his relationship with Riya was. Sanjay Dutt and Riya met when Sanjay was serving his jail term. At that time Riya stood firmly with him. Riya was the granddaughter of the Maharaja of Hyderabad. Sanjay married Riya as soon as he got out of jail and after that signed seven films. After this Sanjay often stayed out of the house and there was no relation between him and Riya.

Live in relationship with Leander Paes

One day Riya picked up all her belongings from Sanjay’s house and went to Leander Paes’ house. After this Leander Paes and Rhea Pillai started living in a live-in relationship. Sanjay and Riya may have separated earlier but legally both were husband and wife. Despite this, Rhea and Leander got married in 2005.

Could not get divorce from Sanjay

Riya Pillai was unable to get divorce from Sanjay Dutt. First Sunil Dutt’s death and then Sanjay Dutt’s court case. He and Leander were in a live-in relationship and in the meantime their daughter was born. After this finally, in 2008, Sanjay Dutt and Rhea Pillai also got divorced.

After the birth of their daughter, there were ups and downs in the lives of Leander Paes and Rhea Pillai. The matter between the two increased so much that Riya had to take Leander to the court where Leander categorically refused to accept Riya Pillai as his wife. While Riya said that she married Leander twice, in 2005 and again in 2008, Leander said that they were only in a live-in relationship.

Rhea Pillai also accused Leander Paes of domestic violence in the court. He said that Leander had locked him in the room and was not allowing him to come out. Riya calls up Shah Rukh Khan’s wife Gauri Khan for help. Gauri reaches there with 5 bodyguards and rescues Riya.

Leander did not accept Riya as his wife in court and refused to pay alimony. Riya was demanding Rs 4 lakh per month. He said that his daughter has night waking disorder, due to which Riya also has to stay awake at night. Later, Riya started getting an allowance of Rs 1 lakh per month.

After this, Leander and Rhea Pillai were seen fighting the custody case for their daughter. Leander said that Riya is not a good mother, while Riya said that Leander never lived with the girl. Leander did not financially help Riya even when her daughter had a brain tumor.

Riya and Leander’s relationship lasted for 10 years but Riya did not want to give them any financial help. He said that Riya is not his wife. At the same time, Riya was living on the flat she got after getting divorced from Sanjay Dutt.

Now seeing the new pictures of Leander Paes and Kim Sharma, everyone is speculating that finally, Leander Paes has moved on in life. Apart from this, he has also improved relations with his tennis partner Mahesh Bhupathi and it is believed that his story will soon be seen on the big screen.