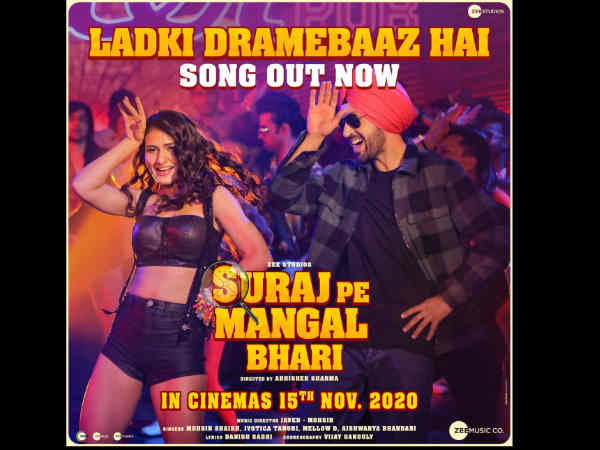 There are a total of seven songs in the film which have been composed by Javed – Mohsin and Kingshuk Chakraborty. Javed – Mohsin has composed five songs of the film. Earlier, the duo has also composed music for Munna Maikal but they are remembered for Jalebi’s scintillating song Pal.

girl is a drummer

Ladki Dramebaaz Hai is a Peppy song that instantly grabs the attention of the listeners. The beats of the song are quite good but the graph of the song is normal. The song is sung by Mohsin Sheikh, Jyothika Tangri, Aishwarya Bhandari and Melo D. It is written by Danish Sabri.

Dauda Dauda is a situational song which is fun to listen to. The lyrics are by Danish Sabri. It is sung by Javed – Mohsin and Divya Kumar.

Basanti is an item song picturized on Karishma Tanna. The song is composed by Javed Mohsin and lyricist is Danish Sabri. There is choreography by Vijay Ganguly. The lyrics of the song Basanti are quite sensational today and hence becoming popular among the youth. This song will be a shadow in this Diwali season parties.

Another version of Vareya is also in the album of the film. Palak Muchhal has assisted Vibhor Parashar in this song. The song is very good and gets on the tongue very quickly. Although it stays with you, it is not so effective.

Mars heavy on the sun

The title track of the film is quite moving. And as far as it is, it may have been used for the background in the film. Music is by Kingshuk Chakraborty and lyrics are penned by Abhishek Sharma. The song is sung by Chinmayi Tripathi and Saanjh V.

Nowadays no film is complete without rap. So Suraj Pe Mangal Bhari’s album also has a rap named Bad Boys which is sung by Melo D. The song is composed by Kingshuk Chakraborty and written by Melo D. Although this song is not impressive.