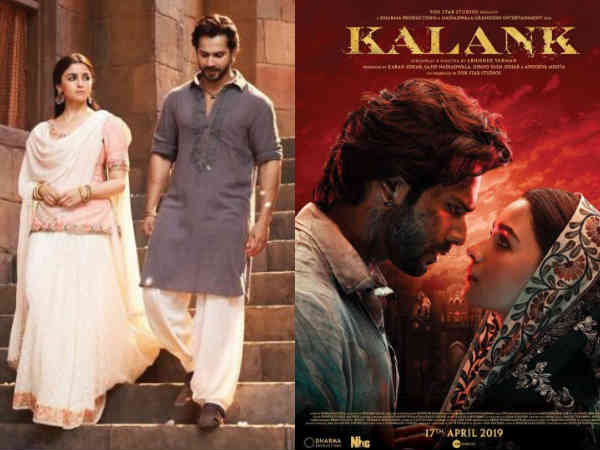 Karan Johar’s Dharma Productions is all set to kick off April with Kalank and now the title track of the film has been released where Alia Bhatt and Varun Dhawan ie Roop and Zafar’s romance is seen for the first time. The song is sung by Arijit Singh and his Sufi touch is making this song great.

People have high hopes for Abhishek Varman’s film Kalank. This is Dharma Productions’ second period drama to be helmed by Karan Johar after Kesari. At the same time, this is the first period drama for Varun Dhawan and Alia Bhatt and the fans are very excited for this film.

Karan Johar had kept his distance from period dramas till date but now he is breaking into this zone – with Kalank and Takht. In such a situation, it can be great to see his style.

The association between Dharma Productions and Music has always been great. In such a situation, when a period drama is in front, there are hopes of getting stronger on the musical side.

The scintillating music of the film has already been reflected in two songs of the film, Ghar More Pardesiya and First Class. The title track of Kalank is the third song of the film.

an overdose of romance

There are three pairs in the film – Varun Alia, Aditya Sonakshi and Sanjay Madhuri. In such a situation, there is bound to be an overdose of romance in the film, whose glimpse will also be seen in the teaser.

In the film, Madhuri Dixit will be seen doing what she does best – dance. In such a situation, it will be a great experience to see their flavor.

While this will be Alia Bhatt’s first period drama, Sonakshi Sinha and Aditya Roy Kapur’s romance could be the biggest highlight of the film.

It is believed that if the film is a period drama, then the sets of the film will also be excellent. And all these things have been glimpsed in the teaser which is promising blockbuster from now on.

It is worth noting that earlier the name of the film was believed to be Shiddat and Sridevi was in the lead role in this film. But suddenly, after she left the world, Madhuri Dixit, without wasting any time, accepted the role of Sridevi. Directing the film is Abhishek Varman who has made his 100 crore debut from the very first film from 2 States.

Watch the title track of the film –

For all the hearts in love & in longing, this one’s for you.