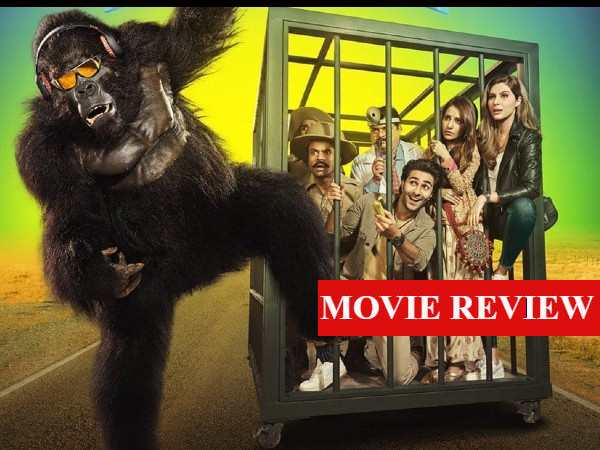 With ‘Hello Charlie’, the director is once again seen adopting the old formula of comedy, where many characters are seen, an atmosphere of confusion is created and then Bhagambhaag ensues. From the very first frame of the film, the director clearly makes it clear that you should not put your mind in this adventure comedy, it is a light-hearted film, which you can watch especially with children.

The film mainly revolves around three characters – business tycoon MD Makwana, Chirag Rastogi aka Charlie and Gorilla. Mumbai’s famous businessman MD Makwana (Jackie Shroff) is trying to leave the country after taking a loan of four thousand crores. In such a situation, his girlfriend Mona (Elnaaz Naoroji) advises him to wear a guerrilla costume and come to the fair in Diu, so that both of them can escape to Dubai by sea. Now the question arises that who will transport Makwana alias Fake Guerrilla alias Toto from Mumbai to Diu? In such a situation, Mona meets directly with Chirag Rastogi aka Charlie (Aadar Jain). About whom his maternal uncle (Darshan Jariwala) says – “Where they stand, there the problem arises by itself.”

Well, Charlie agrees to take Toto to Diu in his uncle’s truck. But what he doesn’t know is that Toto is not a real gorilla, but a costumed Makwana. On the way from Mumbai to Diu, Charlie and Toto become good friends. Both dance and sing together. Both of them face many problems, but Charlie does not leave Toto’s side.

On the other hand, a gorilla is being brought from Uganda to Junagadh Zoo when the plane crashes and the gorilla runs away into the jungle. Now Forest Department officer Ram Singh (Rajpal Yadav) sets out in search of this real gorilla. What will happen when the real Gorilla and Toto aka Fake Gorilla face off? Will MD Makwana be able to leave the country? And in the midst of all this manipulation, will Charlie be able to collect 15 lakhs of his loan? The story of the film revolves around this.

Pankaj Saraswat has been writing scripts for comedy shows and films for years. Therefore, their hold can be seen in these sides. The film looks in a rhythm from beginning to end. She keeps moving forward with a straight flat light tremor. Although some of the climax scenes are very reminiscent of Priyadarshan’s films, which you cannot ignore.

However, the special thing is that all the characters in the film have some important scenes in their parts. The dialogues written by Abhishek Khairkar lacked punch. But the editing done by Chandan Arora and Mitesh Sr makes it interesting. Wrapping up the film in under two hours has been a right move. Andre Menezes’ cinematography could have made the film stronger.

On the acting front, the innocence needed in the character of Charlie is seen in Aadar Jain. His friendship with Toto seems to be good. But they still need to do a lot of work on the gesture. Shloka Pandit and Elnaaz Naoroji are well suited for their characters. But the character that has attracted the most attention is Jackie Shroff. Be it a colorful businessman or a gorilla.. he has done full justice to his character, his swag looked fit for the character. It was nice to see Rajpal Yadav on screen after a long time.

Hello Charlie is available for streaming on Amazon Prime Video. There is no doubt that this film is going to be liked by children for its light comedy. 2.5 stars to the film from Filmybeat.