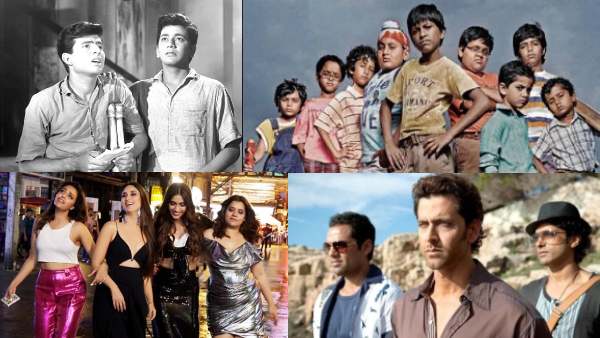 Friendship Day 2021: From Amitabh Bachchan, Aamir to Hrithik, Kareena, these films present an example of friendship

This 1964 film film focuses on the friendship of two boys – one visually impaired and the other physically handicapped. Sudhir Kumar Sawant and Sushil Kumar Somaaya are in lead roles. This film was a super hit.. especially its songs. Directed by Satyen Bose, the film was Rajshri Productions’ second film.

If we talk about Bollywood films made on friendship, then the name of Sholay will definitely be included. Amitabh Bachchan and Dharmendra played Jai and Veeru in this 1975 film. Sholay, a film based on friendship, is no less than an example. In the film, Jai even gave his life for his friend Veeru.

The extent to which a person can go to help his friend and see him progress in life is seen in this film. The song of this film ‘Tere Jaisa Yaar Kahan…’ still makes people emotional. The film starred Amitabh Bachchan and Amjad Khan in the lead roles.

The film depicts how a friend finds himself in debt to help his childhood friend become a big singer.

Directed by Farhan Akhtar, this film is close to every youth’s heart. The story of three friends goes through college to their job. Here not only the happy moments of friendship, but the disputes in friendship are also shown well. The film stars Aamir Khan, Saif Ali Khan and Akshaye Khanna in the lead roles.

Friendship will not be limited to just spending time or having fun. A true friend is the one who gives the right advice to his friends when the time comes. Starring Aamir Khan, Madhavan and Sharman Joshi, the film showcases some of the best moments of college life. The film is directed by Rajkumar Hirani.

you go or don’t

This film, which came in the year 2008, is one of the cutest films made on friendship. In this film starring Genelia and Imran Khan, friendship has not only been shown till college.. but also the friendship between a brother and sister, the friendship of their children with parents.

This film of Rakeysh Om Prakash Mehra is such a story made on friendship which gives goosebumps. This film sets an example from friendship to patriotism. The film starred Aamir Khan, Madhavan, Sharman Joshi, Kunal Kapoor, Siddharth and Soha Ali Khan in the lead roles.

Life will not happen again

How three friends, who are away due to home and job, come together for a trip.. and this trip not only changes the meaning of their friendship but also their life. This is shown by this film of Zoya Akhtar. Hrithik Roshan, Farhan Akhtar and Abhay Deol were seen in the lead roles in the film.

How special childhood friendship is, who would not have gone through this feeling. In the film Chillar Party, such a story of children’s friendship has been shown, which is emotional and also opens the eyes.

Talking about friendship, many films have been made in Bollywood centered on boys. But Rhea Kapoor brought a film focused on girls. In this story of four friends, there is love and there is also a quarrel. Kareena Kapoor, Sonam Kapoor, Swara Bhaskar and Shikha Talsania were seen in the lead roles in the film.