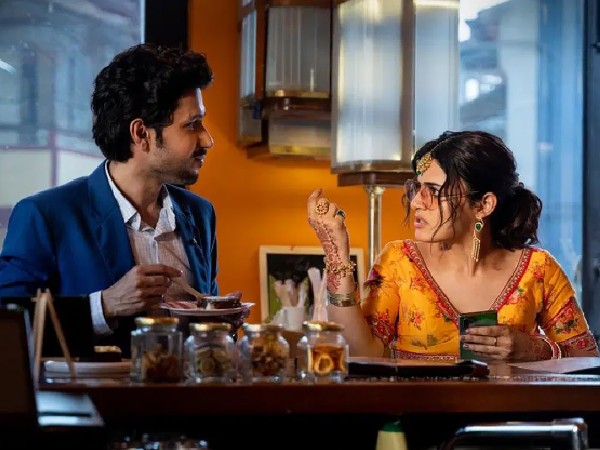 Feels Like Ishq Review: Netflix web series that talks about some addresses with light-hearted love stories

The first short story begins with Radhika Madan starrer ‘Save the Date’. Where Avani’s (Radhika Madan) best friend has a destination wedding in Goa. Avni’s friend is confused about this marriage and on time she leaves the marriage and runs away. Avni along with the wedding planner (Amol Parashar) sets out to find a friend. In all this, there is a different tussle between Avni and the wedding planner. While the wedding planner does not believe in love and marriage, Avani is another name for love. This Khatti Mitthi love story has been directed by Ruchir Arun. On the other hand, Monisha Thyagaranjan has woven this story about the thinking of youth towards marriage and love.

Acting and Directing-
Radhika Madan’s flirtatious style is seen in the series. But seeing Radhika doesn’t seem like anything new, she looks like other films this time too. But she appears to be trying her best to handle her character. At the same time, its burden is clearly visible on the shoulders of Amol Parashar. Which he also manages to a great extent.

Directed by Ayushmann Khurrana’s wife Tahira Kashyap Khurrana, the series depicts the attraction between a school boy (Mihir Ahuja) and a Canadian girl (Kajol Chugh). On hearing a voice, the boy studying in the school falls in love with the girl from Canada. This story is exactly like its title. Only two things are seen in this, crush and quarantine.

Acting and Directing-
Kajul Chugh and Mihir Ahuja have played lead roles in this story. While Mihir fits perfectly into the role of a school kid, Kajol Chugh also looks fine. On the other hand, when it comes to direction, the expectation from Tahira was high. which could not be fulfilled.

Star Host is the third story directed by Anand Tiwari. In which Rohit Saraf and Simran Jehani are seen on screen. In the web series, you get to see a new flourishing love story with the beautiful view of Mahableshwar. Rohit Saraf, a girl who has come on a solo trip after a breakup with her boyfriend, is hired by Rohit Saraf to guide and take her on the trip. Rohit has a different dream of his own which the heroine helps to fulfill. This story of meeting and feeling of love could have been more spectacular than this but it missed.

Acting and Directing-
The story written by Saurabh George Swamy and directed by Anand Tiwari seems to be quite slow. The lead actors in the film seem to fail to show expressions at many places.

A love story is not necessarily about a boy and a girl. It is not necessary that feelings and attraction should be only in boys and girls. A light hearted new story has been written by Sulagna Chatterjee. 23 year old bisexual girl (Sangeetha Bhattacharya) who is modern, belongs to a good family and does a good job. You will see the ocean of emotions going on inside this girl in this series. Who has fallen in love with his office girl (Saba Azad). On the other hand, Saba Azad plays the character of a girl who is bisexual but her love is somewhere else. This beautiful story about the love and crush of both is directed by Danish Aslam.

Acting and Directing-
While Saba Azad fits in to play the character of a dashing and courageous girl, Sangeeta Bhattacharya also does full justice to her character. With Love Story, Smolgana has tried to show their feelings apart from LGBTQ issues.

The fifth story of ‘Feels Like Ishq’ is ‘Interview’. Sachin Kundalkar has brought a romantic story with the ups and downs of life in the lower class. In which Zayn Mary Khan and Neeraj Madhav have arrived for an interview in an electronic company. There is a conversation between the two regarding the interview. The heroine teaches how important it is to be confident. Through TV, fridge, hero and heroine throw light on many aspects of life. But the twist in the story comes when the heroine remembers her past.

Acting and Direction – Sachin Kundalkar, who directed Rani Mukerji’s Aiyya, has handled the film well. On the other hand, Zayn Marie Khan and Neeraj have made every effort to win the hearts of the audience.

‘I don’t do this to change the world. I do this so that the world doesn’t change me’, this series rests on this beautiful line. A sweet love story depicted with the zeal of youth in college and their strength to pass something.

Acting and Directing-
Jaideep Sarkar has handled the responsibility of direction very well. Somewhere there are ups and downs in the story but the actors Skanda Thakur and Tanya Maniktala manage it. The two have also been dating together and are absolutely reminiscent of the causal days.

The ‘Feels Like Ishq’ web series becomes very slow at some places and this is its weak side. While some scenes look interesting and are pleasing to the mind. The good thing about this series was that the stories were kept short, otherwise they would have become very boring. Of all these stories, ‘Interview’ and ‘She Loves Me, She Loves Me Not’ stand out the most. At the same time, the main attraction of the series has been actors like Radhika Madan, Zayn Marie Khan and Tanya Maniktala. If you are not interested in watching action, bloodshed and action and are interested in light-hearted stories, then you can watch it. 2.5 stars from Filmybeat.