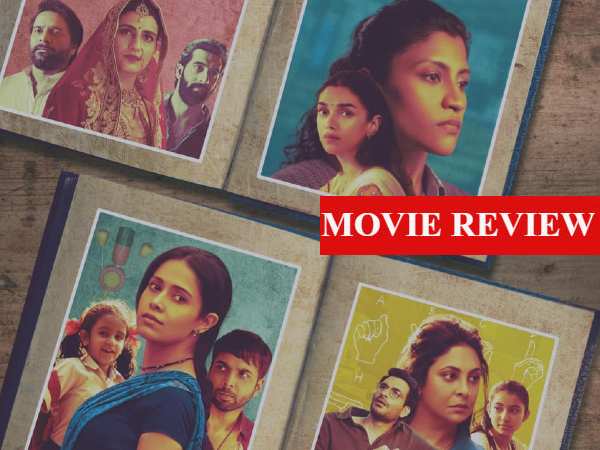 The first story is directed by Shashant Khaitan. Lipakshi (Fatima Sana Shaikh) and Bablu (Jaideep Ahlawat) are a newlywed couple whose marriage is a ‘gathbandhan ki shaadi’. Bablu says as soon as he enters the room- “We used to love someone else, so you will never be able to love you. Won’t say sorry because both the families have benefited from this marriage.” Lipakshi pauses for a moment and then says with annoyance- “Why are all the men in this country spoofs?” From the very first scene the director establishes that this marriage relation is not just for the society, but there are only feelings here.

But Lipakshi is not a fearful or forced girl to be in a relationship. She seeks the support of a man in her life, who she meets with Raj (Armaan Rahlan), the son of Bablu’s driver. Raj and Lipakshi’s love story starts flourishing under Bablu’s nose. Now what is the end of their love story and in the meantime how the most important aspect of Bablu’s life comes to the fore! It is interesting to see.

Shashank Khaitan has written the story of this film, which is about 30 minutes. This tale of broken relationships and tangled feelings is average or one might say no novelty. The characters are strong, but only Jaideep Ahlawat attracts in terms of acting. Fatima’s effort is good, but she doesn’t get the sensuality that the story needs. Pushkar Singh’s cinematography is good and lifts the story a bit.

The strongest of the four stories, which completely succeeds in surprising you. The director of the film is Raj Mehta. The story divides the society into two classes – one is the Kothiwales.. and the other is the Katiyawalas. In one scene, Minal (Nushrat Bharucha) complains to Sushil (Abhishek Banerjee) – “Yeh kothi wale kisi ke sage nahi hai.”

Sushil does iron work by setting up a small shop outside the society. Whereas Meenal works in one of these kothi and maintains electricity arrangement in her house by putting katiya on the electricity wires of the society. In between, some untoward incidents happen when Minal, Binny and Sushil all three want to punish this ‘Kothiwala’. When, where and what punishment? You will be shocked to see this.

Director Raj Mehta has kept this film so fast that it does not let it get boring even for a minute. The script of the film is very tight, written by Sumit Saxena. Abhishek Banerjee, Inayat Verma and Nusrat all three have done justice to their characters. There is a helplessness, quickness and finesse in the character of Nushrat, which the actress has shown well. The cinematography of Jishnu Bhattacharya is commendable.

Directed by Neeraj Ghaywan, the story tries to bring multiple themes together and the director has been successful to some extent. Konkona Sen Sharma and Aditi Rao Hydari are fine actors and the coming together of both adds strength and freshness to the story.

Bharti Mandal (Konkana) works as a machine-man in the factory, where she has been trying to get a data operator position for a long time. He has full confidence in his ability. She gets praise, but not position.. because she comes from a ‘backward caste’. The factory owner joins a new girl in her place, that is Priya Sharma (Aditi Rao Hydari). Both are opposite women to each other. After the initial altercation, there is a friendship between the two, and then the matter progresses from friendship. But Priya is married and is not ready to believe that she is gay. She calls it a ‘disease’. She is bound by social rules and thinking. Whereas Bharti goes through discomforts every day. She breaks too, but she is strong.

Directors touch on many subjects

The screenplay of the film is written by Neeraj Ghaywan, through which he touches on topics like casteism and homosexuality. The writing of the film is quite tight, but the pace you want in the story in half an hour, it misses here. There is a bitterness to the characters here, but it doesn’t sting. All the actors have done justice to their character. Especially Konkona Sen Sharma wins hearts. Siddharth Divan’s cinematography is beautiful.

The fourth and last film is directed by Kayoz Irani. Simplest to say but deepest. Natasha (Shefali Shah) and Rohan (Tota Roy Chowdhury) have a daughter, Adaira, who is slowly losing her hearing. Natasha learns sign language to communicate with him, but the distance from Rohan’s daughter, who is busy with her work, keeps increasing. Not only with the daughter, Natasha and Rohan’s relationship is also just like a sand castle, which can break at any time. In such a situation, Natasha meets a photographer (Manav Kaul), who cannot speak or hear. Both talk in sign language. In the very first meeting, the closeness between the two grows. Slowly both spend a lot of time with each other. But will Natasha have the courage to walk away from her established relationships and family?

Both Manav Kaul and Shefali Shah are well suited for their characters. Even though there is no dialogue together, their words reach the heart. Every expression on his face is splendid. Kayoze Iyani has been absolutely successful in showing the camaraderie of relationships. The tight screenplay written by Uzma Khan makes this film strong.

The film’s strongest aspects include the direction and the characters. Clearly out of the four stories, ‘Majnu’ turns out to be the weakest, being the first film. After that the journey of three films passes like a fast train. One after the other, interesting characters keep popping up in front of you, winning hearts, the stories shocking you. Konkona Sen Sharma – Aditi Rao Hydari and Shefali Shah – Manav Kaul pair well.

‘Azeeb Dastaan’ is a good anthology based on the camaraderie of relationships. If you like such topics, then you can definitely check out this compilation of four movies. 3.5 stars for ‘Ajeeb Dastaan’ from Filmbeat.