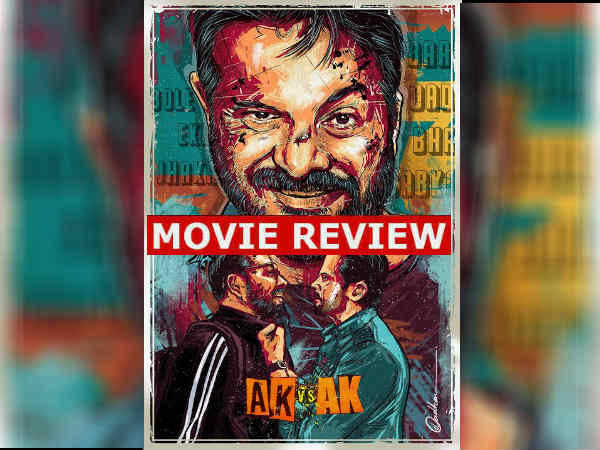 Everyone has seen the plot of AK Vs AK in its trailer itself. A mad director and a bleak actor. An actor needs a film and a director a chance. An idea comes to Anurag Kashyap’s mind – of a realistic film. For this, he kidnaps Sonam Kapoor and then waits for everything to become real in the story. The real story of how a father finds his daughter in 12 hours.

Anurag Kashyap and Anil Kapoor form a different universe in the film. And Harshvardhan Kapoor becomes a small part of this universe. Those who try their best to somehow impress a director like Anurag Kashyap. For this, Harshvardhan tries to be a part of Anil Kapoor and Anurag Kashyap’s film as well and seems to be successful somewhere but right after falling.

Apart from Harshvardhan Kapoor, there are two more supporting characters in the film. Just say cameo. One Boney Kapoor, the other Sonam Kapoor. However, it could have been a bit interesting to see both of them in the same character on screen. But Vikramaditya Motwane has cleverly thrown the film out of the gossip inside Bollywood and straight into a thriller.

Both the main characters of the film – Anurag Kashyap and Anil Kapoor are playing their own characters in the film. But Vikramaditya Motwane completely confuses you here. Are these two really like this, are they really so hyper, is this a film of truth, they are characters from a film within a film. You get confused between all these questions and solving them very easily start believing the characters of Anurag Kashyap and Anil Kapoor to be true. And for this Vikramaditya Motwane deserves praise.

Anil Kapoor is the star in the film and he proves this with every scene. From the first scene to the last scene, Anil Kapoor seems to be trying to carry this film on his shoulders. Sometimes they succeed and sometimes they fail miserably. But still somehow he drags and brings this film till the climax.

The audience has seen Anurag Kashyap acting in films before but this film is his weakest work. Anurag Kashyap falls so hard that he can’t even get up again in his attempt to lift the film with Anil Kapoor’s stronghold. Anurag Kashyap comes across as the most fake character of this film in order to look real in the whole film.

The film is a great experiment. But the basic requirement of every experiment is material. And here the basic requirement of this film was a tight story. And this is the biggest weakness of this film. The idea of ​​the film is excellent but Avinash Sampath did not have the story to make this idea successful. His shoddy screenplay piles up the film.

Overall, AK Vs AK is a good and new experiment that has been tried to be tied in the film of 1.50. The dialogues of the film grab your attention. Especially the one where Anurag Kashyap and Anil Kapoor insult each other. The film also shines brightly like the flame of a fluttering lamp before coming to the climax once again to be extinguished. And the audience will not try to find its flaws, the film maintains so much interest.

where does it disappoint

The biggest drawback of the film is its promises. The film promises to be a reality close to reality film but fails to deliver. Tears real, blood real, trouble real, all the promises pile up when you see Anil Kapoor and Anurag Kashyap as actors in the film. On the other hand, the story of the film is so weak that you can’t even try to darken the film which is woven into the fabric of reality.

AK Vs AK is not a film to be watched with very high expectations. Neither does it have the art of flying Vikramaditya Motwane, nor the wisdom of Anurag Kashyap from Wasseypur. Nor is Anil Kapoor the protagonist in this film. But still you should watch this movie. Because some movies are different, that’s enough reason.