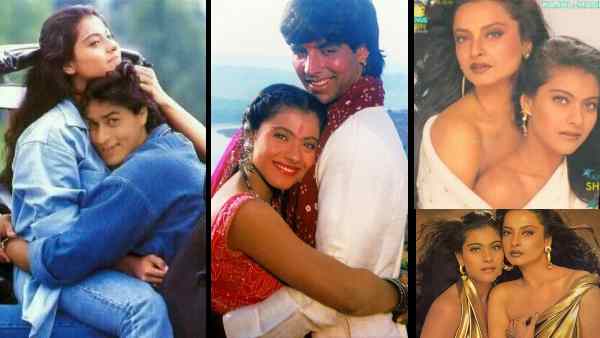 A lot of funny stories of Kajol: crush on Akshay, first fight with Shahrukh, bold photoshoot with Rekha…

Had a crush on Akshay Kumar

This is 1991. Kajol met Akshay Kumar at the premiere of Rishi Kapoor’s film Hina. In this same meeting, he had such a crush on Akshay Kumar that he told this to his close friend Karan Johar and put him on the task of finding Akshay Kumar in the party. Karan Johar himself had told this thing in an interview. Although it is not known whether Kajol and Akshay Kumar met after that, but both of them did romance in a film named Yeh Dillagi in 1993 which became their only film.

Kajol has known Karan Johar since the age of 17. The two met at a film party where Kajol saw Karan Johar in a three piece suit for the first time and seeing him dressed up in a disco, Kajol burst into laughter. But Karan Johar did not realize that Kajol was ridiculing him. However, since then this friendship started which continues till date.

Kajol’s first meeting with Shah Rukh Khan was on the sets of the film Baazigar. But this meeting was not very interesting. Kajol had reached the shooting on time and Shah Rukh Khan did not reach the sets till late the next day after celebrating New Year’s party. When Shah Rukh Khan reached there, Kajol was seen shouting to the entire crew about this unscrupulous hero who reaches the sets late. Seeing Shahrukh, Kajol got angry on him too and Shahrukh did not say anything. Kajol became more angry on this and said that these heroes do not even speak anything. Then Shahrukh had to break his silence and he also told Kajol – if I start speaking then you will have to be completely silent. After this, while working in the film, both of them had such a friendship that till date they are close friends of Bollywood.

Kajol is cool. Whatever they do, they do it only when they feel right. In such a situation, during the shooting of a song for Baazigar, when Kajol was asked to blush too much, she could not do that scene because according to her girls are not too shy. In such a situation, Saroj Khan gave the idea to Shahrukh Khan to pinch Kajol during the scene. Shahrukh Khan did the same and then everyone got that perfect shot.

Everyone makes mistakes and weird things. Kajol had also got such a strange photoshoot done in her career with Rekha. Rekha and Kajol were seen very close to each other in this photoshoot done for Cine Blitz magazine and it was quite a bold photoshoot according to that era. Although today, there is nothing like this in these pictures, but at that time Kajol did not like to talk about this photoshoot too much.

clothes were not according to the mood

Kajol used to work according to her mood. And their mood was made and deteriorated by the fact that the things that are happening to them are happening according to their mind or not. While she did not look very happy wearing a bikini in Baazigar, she also did not like her clothes much during Karan Arjun’s song Jaati Hoon Main. But Rakesh Roshan was not ready to change these clothes and Kajol to shoot. Then Shahrukh Khan came between the two and explained to Kajol that the actor’s job is to listen and believe only by trusting the director.

Kajol took a short break from films after her marriage and the birth of daughter Nysa. So when she returned with Aamir Khan in Fanaa and turned down Shah Rukh Khan’s Kabhi Alvida Na Kehna for this, the fans were shocked. But Kajol liked the script of Fanaa and had to do the same film. In such a situation, about working with Aamir, he said in an interview that I used to think that Aamir is very stubborn and he will have to face it. And I will have to bear Amir too. But after shooting for a few days, our tuning was fine. Earlier, Kajol had worked with Aamir Khan in Ishq and according to Kajol, the two did not even talk at that time. Because after the fight with Shah Rukh on the first day of Baazigar, Shah Rukh advised Aamir not to work with Kajol. And Aamir replaced Kajol with his film. Later, during the shooting of Baazigar, Shah Rukh took back his words and told Aamir – Kajol mein kuch baat hai, when she is on screen, everything automatically feels good.

Kajol was offered by Karan Johar to never say goodbye but Kajol turned down the film because she did not like that a man and a woman are running an affair by cheating on their partners in their marriage. On Karan Johar’s show Koffee With Karan, when Karan Johar asked her to give any advice to the couple after the newly married Aishwarya Rai-Abhishek Bachchan, Kajol’s reply was – Kabhi Alvida Na Kehna Kabhi Kabhi Dekha. At the same time, he also told Karan Johar that if he takes me in his film next time, he may become a hit.

Stop speaking in front of Shahrukh

During Karan Johar’s chat show, Kajol was also asked a question on Shahrukh Khan and Ajay Devgan’s equation. Kajol said that Ajay Devgan could never befriend Shahrukh because he is always busy with work. Taking a jibe at this, Shah Rukh asked him that what are we sitting empty? Only your husband works. Kajol burst out laughing at this talk of Shahrukh. When Shahrukh said that Kajol’s chemistry with Ajay Devgan did not look good on screen as they were really in love and acting on screen has to be done. Hearing his words, Kajol’s mouth was left wide open and she could not give any answer.

Kajol is not fond of expensive things. They say that if someone gifts them an expensive thing, then they get in trouble thinking that they will have to keep it safe. This is the reason why Kajol believes that buy and use the cheapest things and make FD of money.