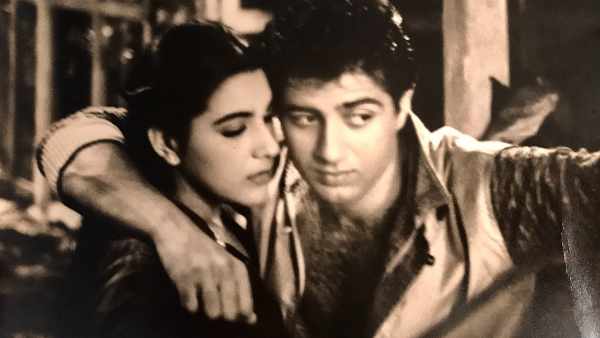 Actually, Dharmendra was very impressed after seeing Rahul Rawail’s film Love Story. Kumar Gaurav and Vijeta Pandit starrer this film won the hearts of the youth. This was the reason Dharmendra wanted Rahul Rawail to direct his son Sunny Deol’s debut film. It happened and the film also created history.

The film also marked the first independent film written by Javed Akhtar after breaking up with Salim Khan. However, he was accused of script plagiarism and even said that the entire idea of ​​the film was taken from Nasir Hussain’s famous film Hum Kisi Se Kum Nahin. Whatever the reason, but the film was a flop at the box office and Sunny Deol – Amrita Singh became superstars overnight.

Meenakshi Seshadri and Mandakini also auditioned for the lead role for Betaab but Dharmendra rejected both. He wanted to launch a newcomer with Sunny Deol. It is interesting that in the song Jab Hum Jawaan Honge from the film, Sunny Deol’s childhood character was played by a little Sonu Nigam.

The editing of this film was done by David Dhawan who by then had started his struggle in Bollywood. After 36 years of Betaab, when Sunny Deol was planning to launch his son Karan Deol, he wanted Karan Deol to enter the industry with the remake of Betaab. Not only this, he wanted Amrita Singh’s daughter Sara Ali Khan to debut with his son in the film, just like Amrita Singh debuted with Sunny Deol.

If Sunny Deol could have really implemented this plan, then it would have been a film to be recorded in Bollywood history where two stars debuted together and years later their children made their debut with the remake of their debut film. However, this plan of Sunny Deol did not succeed and the reason for this was the bitter history between him and Amrita Singh.

back to back hit movies

If reports are to be believed from their very first film, the relationship between Amrita Singh and Sunny Deol was also not of Keval Ko stars. Both were very close. Amrita Singh wanted to marry Sunny Deol. After the release of Betaab, the pair of both became super hit. After this film, both of them worked together in a film named Sunny.

Got cheated from the very first film

Sunny Deol and Amrita Singh had come close to each other during the shooting of Betaab but what Sunny Deol did not consider necessary to tell Amrita Singh was their relationship. Sunny Deol was in a bond with a girl named Linda since the age of 16. He was stopped and Linda lived with Sunny Deol’s family.

Sunny Deol may have been in a relationship before entering the industry, but this relationship was kept completely hidden. Because it could have an impact on Sunny Deol’s debut and romantic image. This was the reason that when Dharmendra was preparing for Sunny Deol’s debut, Linda’s father called him to him. Linda did not want to leave the Deol family. But still she went to London.

If reports are to be believed, Linda’s father started getting upset with Sunny Deol’s debut and started worrying about his daughter after which he started pressurizing the Deol family for marriage. When Linda’s father did not agree, Sunny Deol reached London with her grandfather and they secretly married according to the customs of Arya Samaj and returned to India. Once again Sunny Deol got busy in his work.

When Sunny Deol returned and started preparing for the release of Betaab, the news of their secret marriage started spreading rapidly. His pictures also appeared in a London newspaper. Seeing this, Amrita Singh could not believe it. Some reports even say that the marriage between Sunny Deol and Linda was a business agreement which both the families later converted into a relationship. Linda’s father used to work for Sunny Deol’s company Sunny Super Sounds.

Announcement of marriage in 1984

This is the first picture of Sunny Deol’s wedding which was published in a London magazine and went viral from there. After this it was revealed that Sunny Deol has married a girl named Linda. Although Linda is now known by everyone as Pooja Deol. Dharmendra had announced the marriage of Sunny Deol in 1984 and on hearing this, Amrita Singh immediately ended her relationship with Sunny Deol.

relationship did not last long

After marriage, Linda’s name was changed to Pooja Deol. But she did not stay long with Sunny Deol and went back to London. After this, Linda aka Pooja Deol never came in front of the media. A few years ago, a picture of Sunny Deol with his wife Pooja and both sons Rajveer and Karan Deol went viral on social media.

After Amrita Singh and Pooja, another name was always associated with Sunny Deol’s life and that name was that of Dimple Kapadia. If you look at some very old interviews, then Amrita Singh herself had confirmed this. Although Sunny Deol, like his father, had decided not to divorce his first wife Pooja. Amrita Singh made a lot of statements about her first co star and Dimple Kapadia in newspapers and magazines which went viral.

Controversy did not leave

A few years back, another picture of Sunny Deol and Dimple Kapadia suddenly went viral on the internet. This picture was from a private holiday of both of them. At the same time, there are only stories and stories in the media about the marriage of Sunny Deol. From the debut film till today, Sunny Deol has always been away from the media but the controversy never left him.

Sunny Deol and Amrita Singh’s Betaab completes 38 years of release. Sunny Deol cheated on Amrita Singh and got married to Lynda in a hush hush ceremony in London.